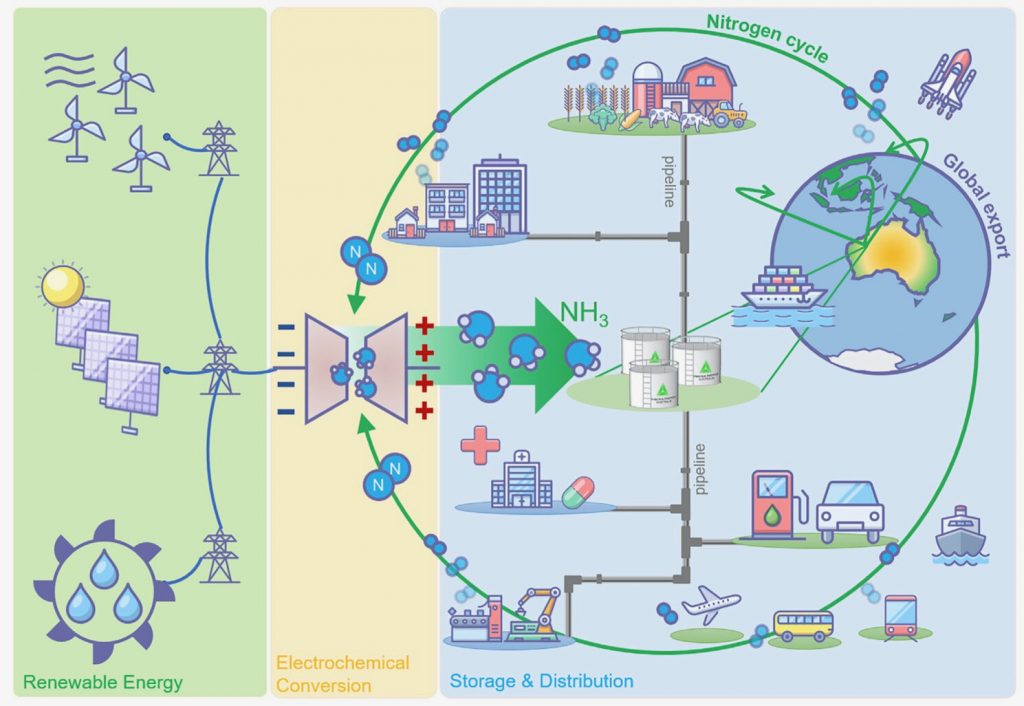 Jupiter Ionics Pty Ltd announced today that it has closed a seed round of financing of $A2.5m to support the development of its world-leading electrochemical technology for the modular production of Green Ammonia.

Ammonia is an essential ingredient in the global food system through its role in fertiliser production, but current technology typically generates around 2 tonnes of CO2 for every tonne of ammonia produced.

Jupiter Ionics’ technology, which it has exclusively licensed from Monash University, uses renewable electricity, air and water as inputs to make ammonia with potential for zero carbon emissions.

“Ammonia is recognised as a key challenge for global decarbonisation efforts, such as those that were discussed extensively at the recent COP26 meeting in Glasgow” said co-founder of Jupiter Ionics and co-inventor of the technology, Professor Doug Macfarlane. “Our recent breakthroughs have opened up a new avenue to produce Green Ammonia which has several significant advantages over alternative approaches.”

The seed investment round included local angel investors Roger Gillespie and John Clifford, alongside Tenacious Ventures, a specialist agtech venture capital firm. Jupiter Ionics will use the investment funds to transition the technology from the lab bench to a commercially scalable device that can service a range of end users.

“The current global market for ammonia, which is mostly used in fertiliser production, is worth around US$70b. However, proposed new uses for Green Ammonia as a shipping fuel and a form of energy storage mean it could be many multiples of that in the future” said Dr Charlie Day, CEO of Jupiter Ionics. “This investment will enable us to fast track our development program so we are well positioned to meet the burgeoning demand.”

The company is the latest in a growing stream of companies to have emerged from the technology precinct anchored by Monash University. “The innovation ecosystem around the university is growing in depth and breadth, as new spinouts like Jupiter Ionics attract both new investors and new entrepreneurs to be a part of it alongside our academic staff” said Alastair Hick, Senior Director at Monash Innovation. “This is a long-term vision for the University, and whilst we’re thrilled with the portfolio of spinouts we have already, we see plenty more potential in the pipeline”.

The Monash team led by Professor MacFarlane and Dr Alexandr Simonov that developed the technology are internationally recognised as being on the cutting edge of electrochemical ammonia technology, as reflected in their recent publication in the prestigious international journal Science. The research was also supported by grant funding from a range of sources including the Australian Research Council, the Australian Centre for Electromaterials Science and the Australian Renewable Energy Agency.